Why is the Census Important?

The Constitution mandates that a Census be conducted once every 10 years to count every single person living in the United States. The Census determines how federal funding is allocated to communities and how many representatives each state has in Congress.
‍
In 2017 alone, $1.5 trillion in federal funds were distributed across our country based on data collected during the last Census. This money goes towards improved medical services, additional public schools teachers, construction of affordable housing, safer roads and bridges, and much more.
‍
By filling out the Census, you ensure that your family and community get their fair share of federal dollars and representation for the next 10 years!
‍

‍The 2010 Census may have undercounted as many as 48,000 individuals in the Bronx and 35,000 individuals in Westchester. Undercounts disproportionately take place in communities of color and low-income neighborhoods. An incomplete count could cost our district billions of dollars over the next decade, which would especially impact our youth throughout their childhood.
‍
In New York City alone, the loss of just one person from the Census count could reduce education funding by $2,295, and funding for job training by $281.
‍

How Can I Fill Out the Census?

Fill out your Census form through the Census website, a toll-free call with 13 different language options, or by returning the questionnaire your household received in the mail.

It takes less than 10 minutes! Complete your Census questionnaire before September 30th.
‍

Will someone knock on my door?

Starting on August 11th, Census workers will visit households that have not yet replied to the 2020 Census to conduct in-person interviews. Fill out the Census now if you want to avoid this.


Do I need an ID to fill out the Census? What if I lost my Census mailer?

No, you do not need a government ID to complete the Census. You will need a 12 character Census ID code, which you should have received in the mail. If you cannot locate your code, fill out the Census online by following the link below the login button.
‍ 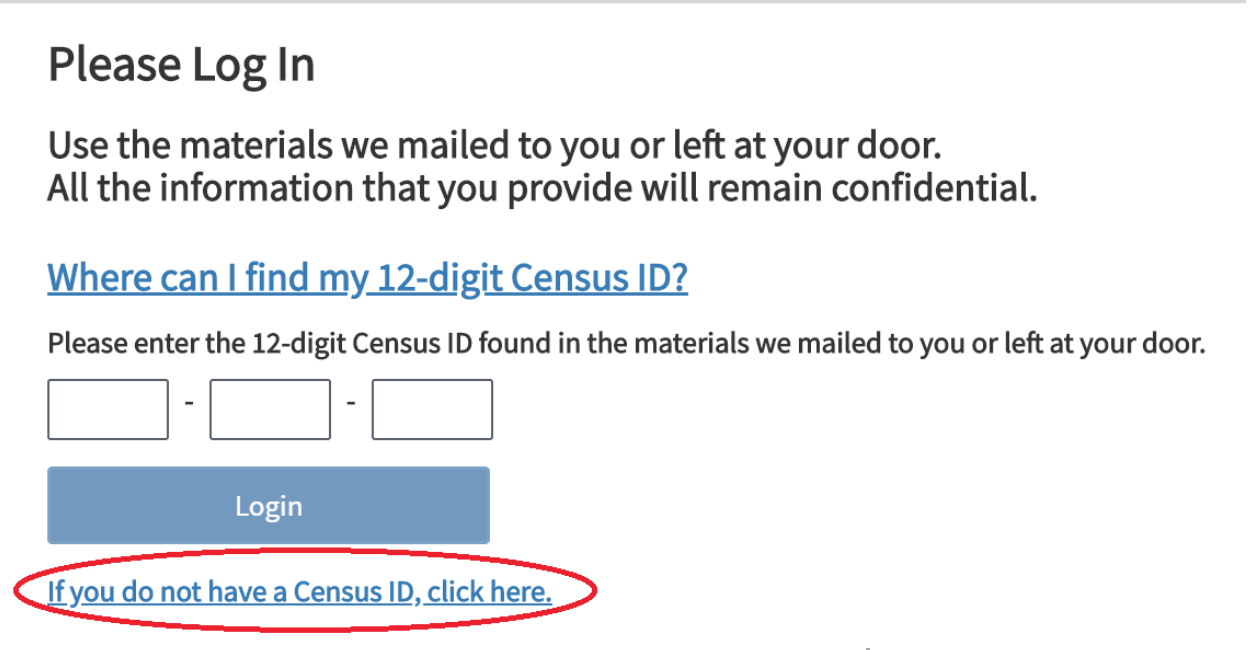 What questions are on the Census?

The Census asks about the number of people living in a household. It asks for their name name, age, sex, race/ethnicity, family relation, and type of home.

The Census and Census workers will NOT ask you for your immigration status, social security number, financial information, religion, or political affiliation.
‍

Is my personal information protected?

Do I count my children?

Parents, grandparents, aunts/uncles, or any legal guardian should count every child that lives in their household during the school year.

Children (especially those under the age of 5!) are historically the most undercounted group in the country: nearly 2.2 million children were not counted during the 2010 Census, costing communities billions in federal funding for programs like SNAP, CHIP, Head Start, and Medicaid.

What about college students?

College students should be counted at their college address (either on- or off-campus), even if they are staying at your parents’ house due to COVID-19 closures. College towns rely on an accurate count of students to reflect the size of their communities.
‍

What if I have recently moved or do not have a place to live?

List the location you lived at as of April 1st, 2020 as your residence.

If you were in transition on the date (moving, unsheltered, etc.) put the place you resided before April 1st. Here are resources for people in group living situations and those experiencing homelessness.
‍
Bowman for Congress
81 Pondfield Rd, Suite D 351
Bronxville, NY, 10708
Paid for by Bowman for Congress
General Contact
info@bowmanforcongress.com
Press Contact
press@bowmanforcongress.com