Our world is in crisis. There are two fundamentally different visions being offered on how to move forward. On one side, you have the foreign policy vision of people like Donald Trump who want to divide-and-conquer people all around the world by making us turn against each other. They want to build walls, scapegoat the other, and pretend to fight for working people while serving the interests of multinational corporations.
‍
On the other side, leaders are building a progressive foreign policy vision based on our common humanity and shared aspirations. I believe America’s real safety and security comes from ensuring that our communities at home are taken care of, and by strengthening our global partnerships and alliances through robust diplomacy. We must apply our shared values of freedom and dignity to our foreign policy. We must prioritize diplomacy over war. And we must question how the United States has become the world’s policeman and why our government spends more on the military today than it did during the wars in Korea and Vietnam.
‍
In our district, we need someone focused not on finding money for bombs and bullets, but for schools, health care and jobs. Some politicians want to cut our spending on schools, health care, and social services. But the U.S. today spends more on defense spending than the next seven countries combined. Our nation will spend more than $700 billion on defense spending just this year. That doesn’t align with the values of our district, especially when we have so many in need. 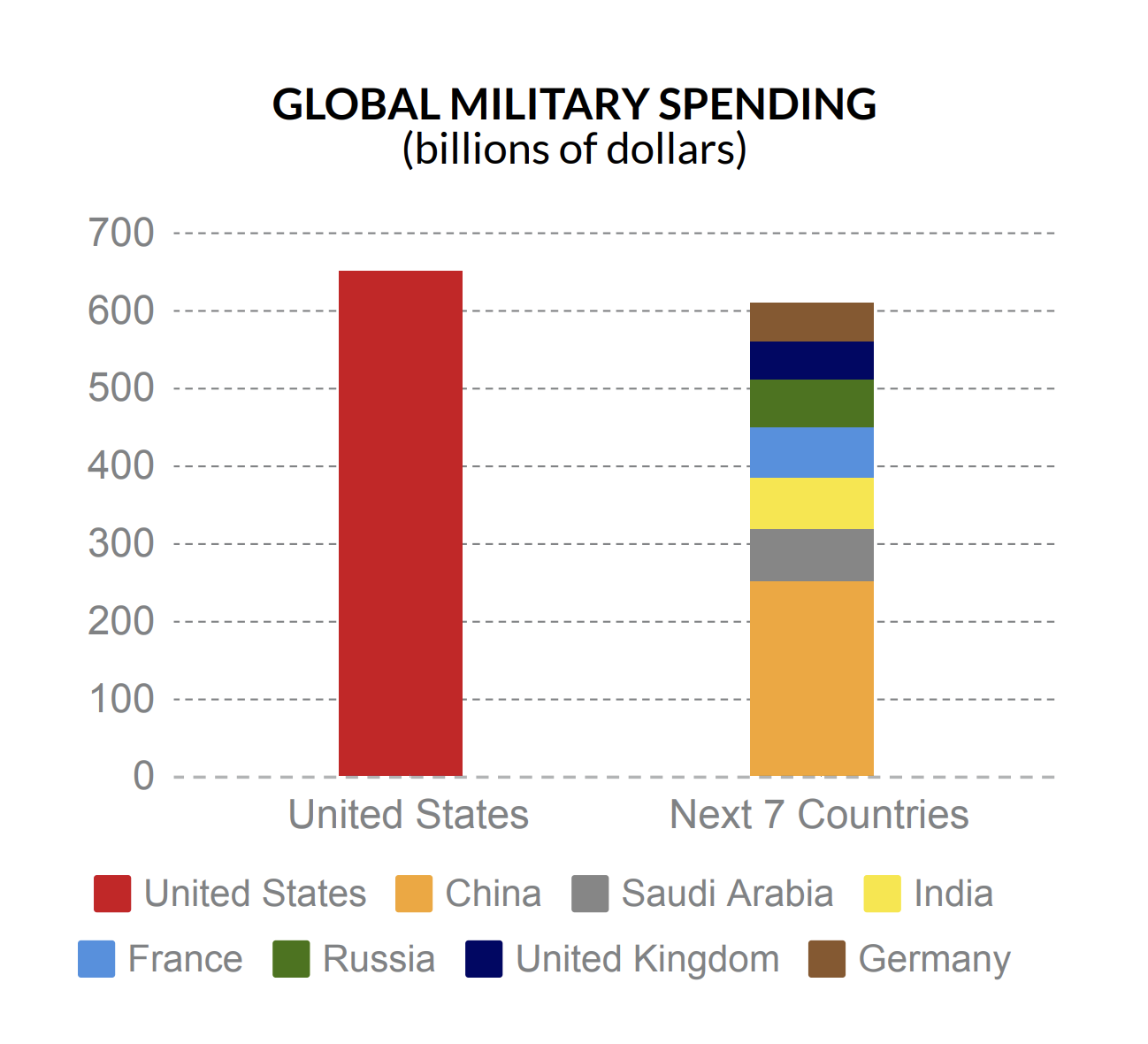 My opponent, Representative Eliot Engel, and I do not share the same foreign policy vision. He voted for one of the worst policy disasters of my lifetime -- an unjust and costly 2 trillion dollar war in Iraq. He voted against President Obama's signature foreign policy achievement which put a lid on Iran’s nuclear program. He went on CNN this past year and said he didn’t want to tie Trump’s hands when it came to strikes on Iran. He was one of only 16 House Democrats in 2016 to vote against an amendment that blocked the transfer of cluster bombs to Saudi Arabia which has been relentlessly dropping them on Yemeni civilians.
‍
My opponent accepts donations from corporations and arms manufacturers like Lockheed Martin, Northrop Grumman, and Raytheon. He supports a hawkish and costly foreign policy agenda instead of focusing on the communities in our district that have been neglected for far too long.
‍
We must dramatically reduce the Pentagon’s budget over the next ten years, end the forever wars, and rebuild a diplomacy-first approach through the State Department. We have been in Afghanistan for 19 years, in Iraq for 17 years, and in Syria for five years. Congress must reassert its authority to bring our troops home. We must repeal the 2001 and 2002 Authorization for Use of Military Force, and ramp up cooperation with our international partners to ensure we are never attacked again as we were on 9/11. The President must come to Congress to seek the authorization of military force.
‍
We must end US support for the Saudi-led war in Yemen. The war in Yemen is one of the world’s worst humanitarian disasters. Our nation must stop supporting the Saudi bombing of Yemen. We should not be providing a blank check for Saudi Arabia’s pernicious influence in the region and world.
‍
We must rejoin the Iran nuclear agreement. President Obama’s 2015 Joint Comprehensive Plan of Action successfully brought the world closer to peace through diplomacy. Trump’s decision to discard the deal undermined American influence and put us on a path to greater conflict. In Iran and other places around the world, our blanket sanctions are negatively affecting the public health response to the coronavirus.
‍
We must take care of our veterans.  We must fully fund the VA, expand access to health care and mental health services, and strongly push back on efforts to privatize the VA.
‍
We must support peace, dignity, and security for all Israelis and Palestinians. I support a two-state solution and believe in democracy and self-determination for the Israeli and Palestinian people. I believe firmly in the right of Israelis to live in safety and peace, free from the fear of violence and terrorism, and support continued U.S. aid to help Israel confront these security challenges. I also believe that Palestinians are entitled to basic human rights, safety from violence, and self-determination in a state of their own. These commitments to supporting security and freedom for all are not mutually exclusive, and as a member of Congress, I will support policies that promote the long-term interests of the United States and both peoples.
‍
We must also have honest conversations about our government’s role in enabling the continued occupation of the Palestinian people. Our taxpayer dollars should not be going toward subsidizing settlement expansion, home demolitions, the detention of Palestinian children, or in any way supporting the threatened Israeli “annexation” of the West Bank. Past presidents like Ronald Reagan and George H.W. Bush used our financial leverage to promote peace in the region as well. We must ensure that U.S. support is used to address the very real security threats Israel faces, not to entrench the occupation.

We must stand up to the global far-right. We need to stand up to this far-right authoritarian movement that's taking place across the world, not cozy up to them, whether that’s in Saudi Arabia, Hungary, Brazil, India, Israel, or here in the U.S. It’s a fight between leaders and movements who are dividing people up and those who are bringing people together around a common purpose.

We must promote trade policies that support workers, not CEOs and Wall Street. While Trump's NAFTA 2.0 trade deal failed to include any discussion of climate change, we must ensure that future trade agreements focus on how the climate crisis can bring the nations of the world together around an agenda for our common humanity and linked fate that we so desperately need. Otherwise, workers around the world will continue to be thrown into a race-to-the-bottom that only serves wealthy multinational corporations. Global institutions like the World Bank and IMF must be reformed to address the ways many nations around the world, particularly in Africa, Asia, and Latin America, have faced disinvestment, exploitation, and unfair debt arrangements. By 2050, Africa in particular will account for 25 percent of the world’s population and must have a larger voice on the global stage as we transition the world’s economy toward clean and renewable energy. This is especially important considering the continent will be the most adversely affected by the climate crisis despite contributing the least to carbon emissions.
‍
A Marshall Plan. I support Secretary Julian Castro’s idea for a 21st century Marshall Plan for Central America. We must work to address the root causes of violence and migration in the Northern Triangle of Central America. Through economic investment and strong diplomatic ties, we can help create sustainable economies. We don’t need to be the world’s policeman. We need to be the world’s partner.
Our Campaign is Powered by Volunteers Like You
Bowman for Congress
81 Pondfield Rd, Suite D 351
Bronxville, NY, 10708
Paid for by Bowman for Congress
General Contact
info@bowmanforcongress.com
Press Contact
press@bowmanforcongress.com